Mount Rushmore is situated in South Dakota National Park. The mount was once known to the Native Americans as “The Six Grandfathers”, before the lawyer Charles E. Rushmore renamed it after an expedition there.
It is known worldwide for the monumental sculpture imagined by the historian Doane Robinson and created by the American sculptor Gutzon Borglum between 1927 and 1941 to promote local tourism. 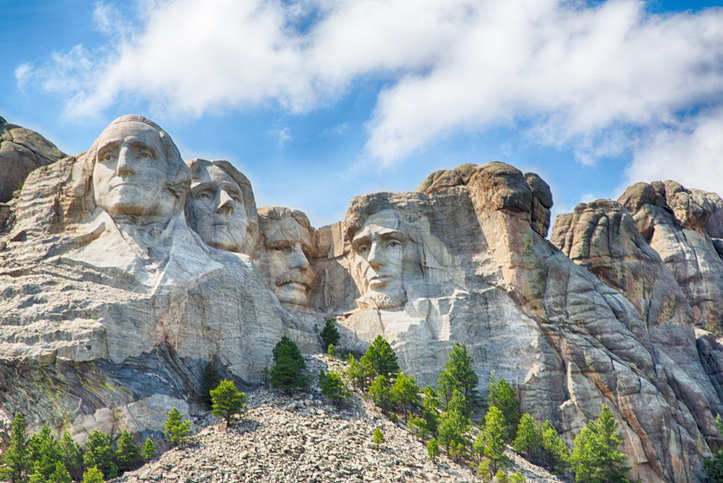 The sculpture, made of granite, is 60 feet high (about 18 metres). It represents 4 of the most important American presidents. From left to right, you can discover the faces of George Washington, Thomas Jefferson, Theodore Roosevelt and Abraham Lincoln. Gutzon Borglum created Mount Rushmore to commemorate America's first 150 years as a free country. He chose these 4 presidents to “commemorate the founding, growth, preservation, and development to the United States of America.”
Five other faces should have been carved: Susan B. Anthony’s face, who played an important part in the USA for women’s rights, and those of 4 other presidents. But because of lack of money, the project failed.

Such a project was long and controversial. Indeed, even though the Whites had gained lands after the American Indian Wars and the Treaty of Fort Laramie signed in 1868, they had left the Black Hills region to the American Indians in perpetuity.
Consequently, the Native Americans saw the sculpture as an outrage or as the indication of the Whites’ superiority over them when the Whites decided to build it.

Therefore, in 1971, they protested and occupied the site before renaming it Mount Crazy Horse, after the famous Indian chief. Fortunately, another memorial, the Crazy Horse Memorial, imagined by the Polish sculptor Korczak Ziółkowski, is built a little further into the Black Hills. This memorial, which should be larger than the sculpture into the Mount Rushmore, is carved into these hills, as they are sacred for the natives. The project, started in 1948, is still a work in progress and could last 50 more years.

What’s more, the sculptor Gutzon Borglum was controversial too, since he was thought to be connected with the Ku Klux Klan, an American white supremacist group. He had accepted to build another monument in 1915, Stone Mountain, a memorial to the heroes of the Confederacy mainly funded by the KKK.

The Confederacy is a group of eleven states that seceded from the United States after the election of Abraham Lincoln in 1860. It lasted until 1865 and was led by Jefferson Davis.
3. Why this project ?

As said before, the sculpture was meant to bring lots of tourists to the place. Of course, the Presidential Memorial is the main site of South Dakota’s tourist industry, but who could have said that the annual number of visitors would reach 3 million people! In 1941, nearly 400,000 people admired the new sculpture. What a successful story! And it should last for lots and lots of decades and centuries because, as Gutzon Borglum stated: “This monument will last until the wind and rain washes it away!”

But there are two other reasons to the creation of this monument.
On the one hand it was a way to pay homage to the 4 presidents who had left a major trace in the History of the United States.
On the other hand, Gutzon Borglum wanted to prove to himself that he was able to perform such a difficult task. Well, he died before the end of the construction but his son, Lincoln Borglum, completed the work.

About this masterpiece which represented years and years of hard work, we can say that one thing is sure: Washington, Jefferson, Lincoln and Roosevelt will never disappear from the American landscape!

The Last of the Mohicans

The discovery of a new continent- Seconde- Anglais